Also let's end this discussion here. This thread is about nu, let's keep it this way.
Top

Also let's end this discussion here. This thread is about nu, let's keep it this way.

Okay, anyways, I had fun at notpron and that's what matters.

The Nu target has been replaced with a new one!

The previous one was this: 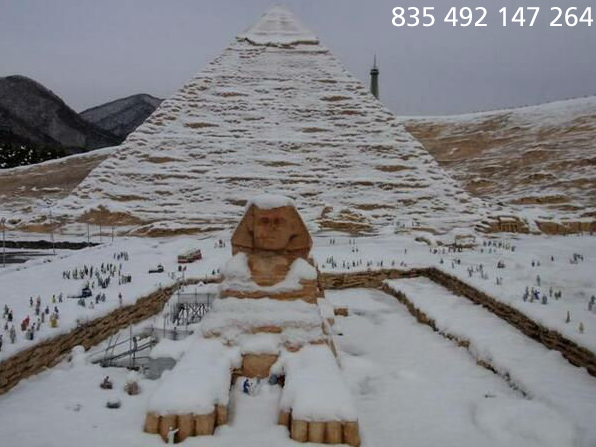 Winners often described it as a cat, a woman, snow, the pyramid, made of stones

Here some of the solutions:

(It says "Snow, Air, cold" and left of the pyramid "forest". 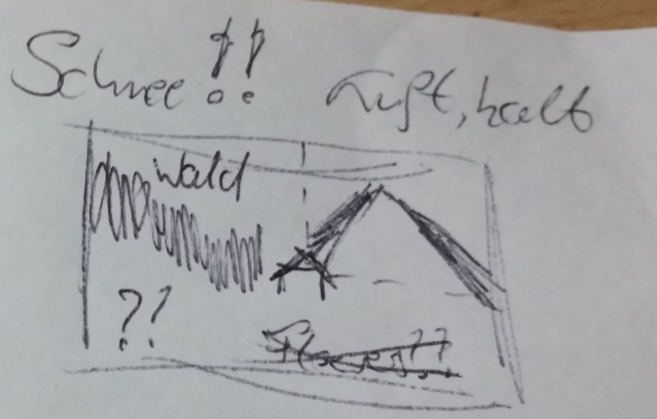 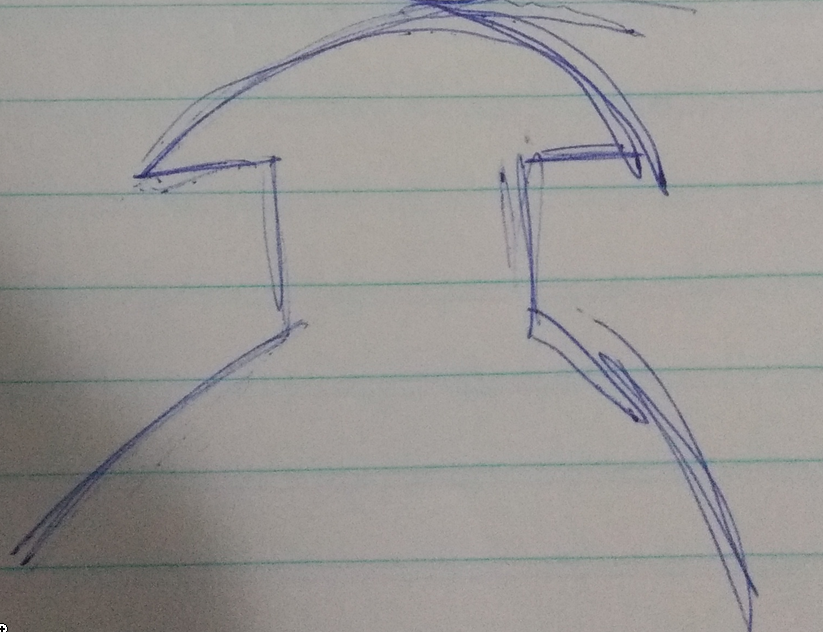 Oh, oh, OOOOOOOOOOOH, i almost got the answer. if i saw a pyramid instead of a Building i was going to pass this level... But its ok. Better off this way.
Top

Finally! The target sounds much more complex. Good luck to those who will try. One more thing, can I try to do it again?

Hello Guys ~ David told me to make this post here in order to make everybody witness my situation.
As you know, a few days ago David post the solution of the previous target, and according to the answers that he said that he accepted I sent him an e-mail asking him why didn´t he accept my last attempt.
Here are some highlights of the draw I sent to him previously: 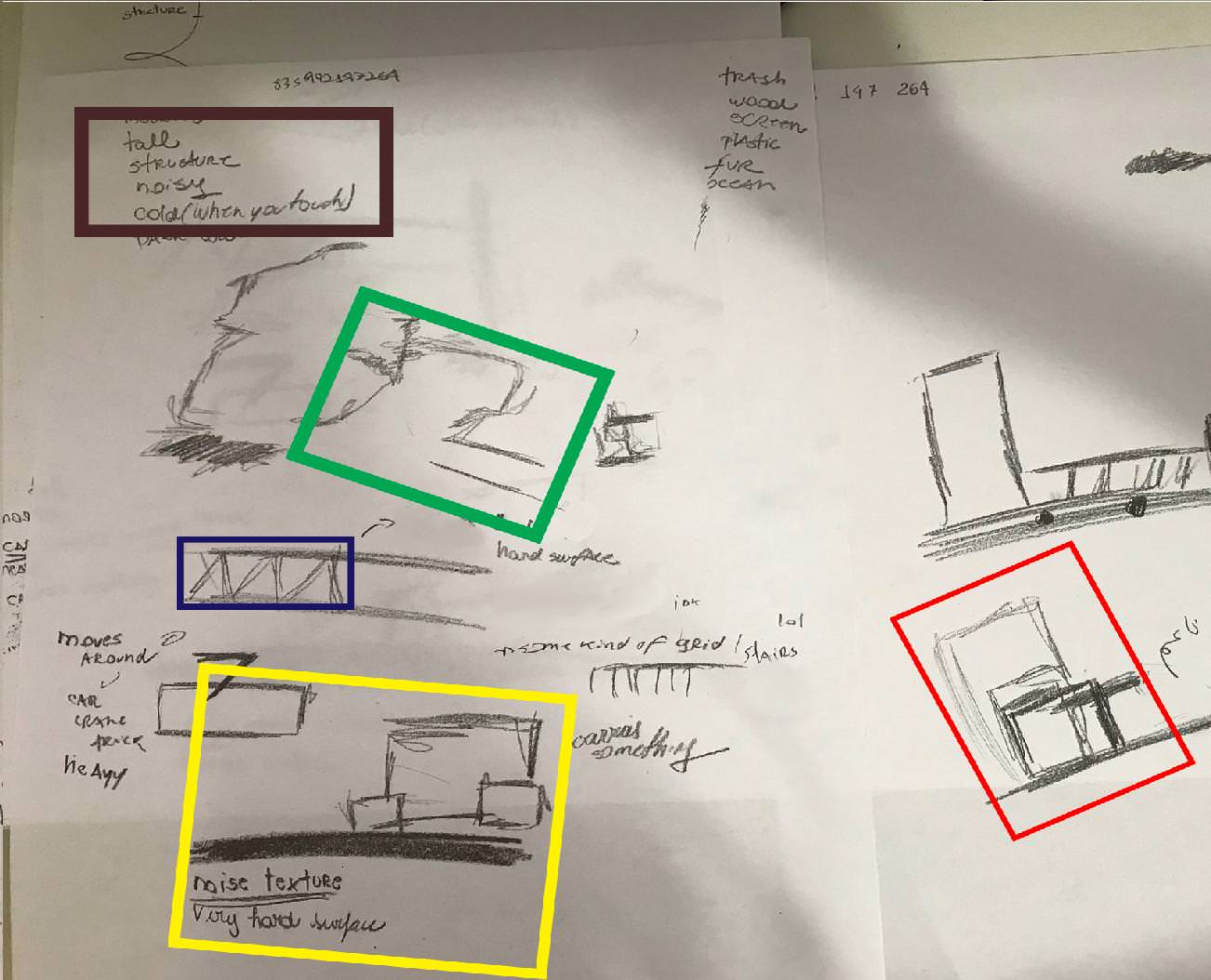 - Cold when you touch ( The picture has snow ) [ dark red ]
- Weird draw tho for those who has been to the pyramids and sphinx before might look as the sphinx from another angle. ( like this ) 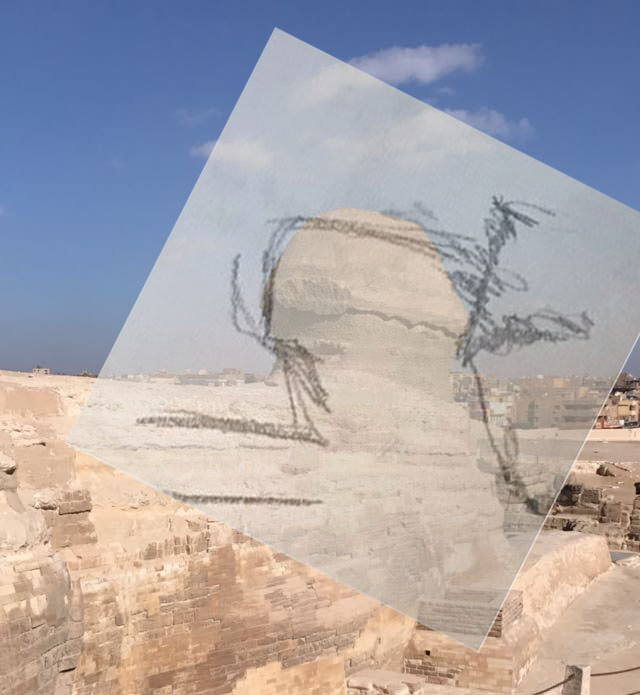 [ green ]
- 3 Triangles ( The pyramids are three ) or some stuff in the left side of the sphinx in the pic ? [ blue ]
- Overlapping blocks ( That´s basically how the pyramids are made of ) [ yellow ]
- With the other blocks, the darker one I meant that there was something in the front and other in the back. [ red ]
- Noise texture aka sands. [ in the yellow part also ]
-----
Type 1 to tell david to accept my draws or 2 to refuse ~~ ( JUST KIDDIND )
Please guys, join the discussion

Edit - I forgot to mention that David´s reply at that time for these stuff was "Go on. You are good."
Top

3 triangles reminds me the 2 mountains and pyramid right behind the sphinx and something that looks very interesting is the fact you felt cold; and noise texture

The problem here is really the amount of stuff you sent me.
If you sent me 1 shape that looks like the sphinx, perfect. But you sent me 5 shapes, and then it becomes really random, because most of that has no resemablance at all.
Also "snow" is just a bonus feature here - it's not enough to solve the puzzle.

Blue: that looks nothing like a pyramid
Yellow and Red: I dunno how you find those rectangles in the picture. There are always rectangles in any picture somehow.
Green: you ignored the part left of the green box.

So the point really is, I need to make sure you get no random results. The more stuff you present, the higher your chance is that something is right, but it gets super blurry and then remote viewing loses its meaning.
If you sent me only the green box and said there is snow, then it would be a solution.
Top

DavidM wrote:The problem here is really the amount of stuff you sent me.

Well in Nu you say "Email me all your results" its looks like a complete paper of RV to me, i agree he could've pick up a few itens tho the results were quite good.
1.
Top

Looks to me to be on the right path but not succinct enough yet. I was in a similar situation and had to provide more detail before David let me pass.
Top

I also have a Nu question thingy!

What I can see in my picture is:
-The tower
-Water (snow)
I also included "Made by Human but I also feel like there's something natural in there"

The tower was in the original target,
The water is the snow in the future,
The phrase describes the pyramid and the sphynx covered in snow


David replied with "I cant recognize the target in this."
Therefore, every time I saw water, snow, blizzard, ice or anything tower like I just ignored it.

What I can see in there is:
- A tall 3D triangle (Not quite a pyramid, but triangular prisms are close enough

David replied with:
" You are not on target"
Therefore once again, I assumed that the target isn't related to triangles and everything else in that picture.

I described:
- Mountain, Object (Stiff, motionless)
- Fresh air
- Rock/Metal/Hard plastic (Sphynx and Pyramid, Tower)
- Color is Red-Yellow which is Orange (The stone's color)
- Color is white and black (Snow and the mountains)
- Drawing of a rectangle which I said was made out of stone (Bad drawing of a sphynx

)
- Soft and Hard (The snow on the pyramid and sphynx)

That's the first time David hasn't said anything about me not being on target.

So I have described:

But for some reason, David said I that I wasn't on target and that he can't recognize the target,
That really, really misled me to the point where I would have never found the real target.
Top

I think people get too caught up in replicating the picture as opposed to representing the essence. It's pretty easy to draw one triangle on top of one rectangle on a piece of paper and then to get irritated later when the picture is revealed to be a snake..."Hey! Why didn't this count? I basically drew a snake! The triangle is his head, and there's his body!" Well...a triangle on a rectangle can also be a house, a spear, and thousands of other things. I got Nu in two tries, and my first picture was the more accurate picture, if I was trying to sketch the photo...but I didn't capture the feelings and representations in my first picture. Once I started saying things like..."I feel wind...and there's a sense of circular motion..." I was more successful.
Top

Catz
What I see in your first picture: spaghetti being taken out of their packaging.
And even if it's a tower, it doesn't matter, because a pyramid or a sphinx are no tower.

And as Squeedle just said: triangles can be anything. It's one of the most basic geometric shapes and they are everywhere. That doesn't count.

In your third attempt you drew a big square... which is also a basic geometric shape.
You mention snow and a mountain.
Snow and mountain are correct, but they are secondary in this image. I need the sphinx/cat/stone woman or so, or a pyramid.
So in the end none of the primary elements of the image have ever been mentioned.


Right now with the new target I have a problem. One person mentions all the right things. But he also mentions 10 things that are not there. It's hard to draw a line when to let it count and when not. My primary focus is to be able to say "look, remote viewing works, this result was not random".
Top
Post Reply
822 posts